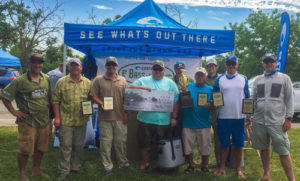 Thanks all around!
It’s a wrap! Like bacon around a filet mignon, the 2016 Bass-N-Fly was as good as we thought it would be.
Forty boats, consisting of 80 individuals and a dog, blasted off on Day One of the two day 2016 Bass-N-Fly Delta Challenge; and at the end of Day Two, everyone, including the drift boat toting duo from Montana, promised to come back.
The success of the tournament was aided in large part by the founding fathers, John Sherman, Ken Hanley, Kevin Doran et al. who built a little dream into a recognizable brand by the time we got a hold of it; and with the addition of Bass-N-Fly’s new title sponsor, Costa del Mar, and the bedazzling support from a host of event sponsors, the much anticipated return of Bass-N-Fly had no other option, but to be epic. More… (event sponsors).
Mostly repeat offenders and some first time competitors rounded out the field and a professional video and camera crew documented their action, on and off the water. Dave Sanchez and his band of tournament specialists kept the party on track.
Ultimately, the father-son team of Neal and Brian Pultz, took home first place, while second place went to team Marty and Joe Adrian, and third place was captured by a team consisting of founding father John Sherman and BFF Ric Rudgers. Those falling in fourth to eighth place were rewarded with cash prizes too and everyone took home schwag and prizes that made their entry fees look like small potatoes. More… (final results).
Costa’s Peter Vandergrift educated us all on the detrimental impact of plastics. And, he announced a new big fish prize featuring an all expenses paid expedition to Guyana to hunt down the largest freshwater fish on the globe, the Arapaima. To win the exotic prize, you just have to top Mike Baisdon’s current tournament big fish weight of 11-8oz.
In the end, one of the classiest and clearly, the premier fly fishing tournament for an esteemed national gamefish, the black bass, has returned with a vengeance and we look forward longingly to what’s to come.
On behalf of Maury, Costa and myself, I think we dun purty good, but certainly, we could not have done it without the participating fly fisherman, our stellar event volunteers, all those generous companies and individuals who supported us, and last but not least, Dave Sanchez and his crew.
Noel de Guzman
Maury Hatch
Don’t forget to send good vibes and support to our sponsors.